Daily log-in bonus items are granted via a rewards calendar that every player can collect from.

There are two types of reward calendars, one for new characters, and the regular calendar. Both calendars grant a variety of valuable items, including some shop items.

Every month features a different Grand Prize which is claimed by assembling four pieces. One piece can be claimed every seven days. For the rest of the days, the reward items are the same from month to month, with the later days giving bigger and often better rewards. For example, gold is rewarded on day 1, 8, 16, and 29, with each later day the gold reward getting bigger. Combat experience is rewarded on day 6, 13, 20, and 27 in a similar fashion.

The regular calendar is a per (server) account basis, i.e. can only be claimed on one character per account per server, and the items are all account bound.

If you miss a day, you'll simply claim that item the next day, with the rewards at the end of the calendar becoming unavailable. I.e. the days correspond to the number of days you logged in for the month, and not the actual date.

The calendar repeats every year, so that if you miss one of the Grand Prize components, you can complete it the next year, or claim it on another character. 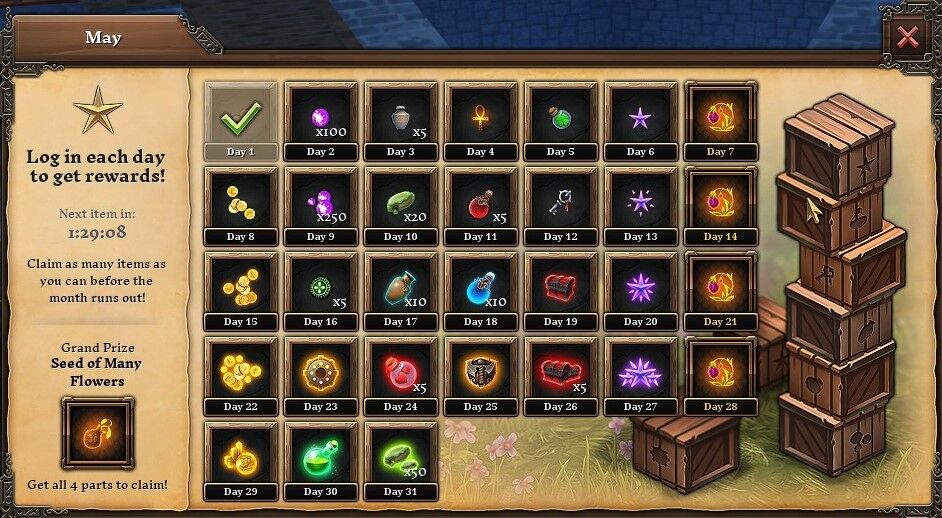 Reward Calendar for May

The 4 fragments for the grand prizes stack and are account bound, but once "used" and combined, they are instantly Soulbound, so be sure to move them to the character you wish to claim the item on before combining.

The new player calendar functions differently from the regular calendar in a few ways:

When the calendar is completed, those characters will default to the regular calendar. (For new accounts, they may miss several days for that month but on the first of the next month, they will be able to claim all items.)

The items are geared towards assisting a new character and include rewards such as an extra bag, sockets, a mount, and a legendary weapon. 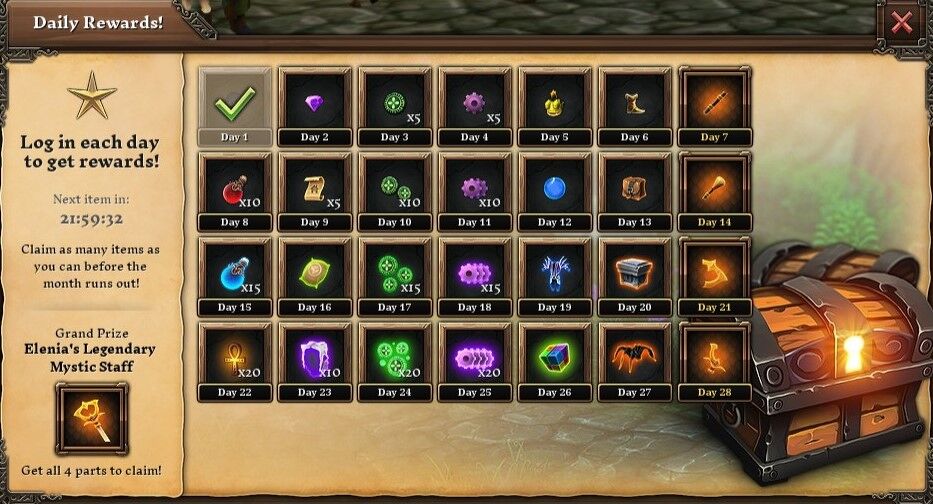 You'll receive 4 pieces of a weapon for your class and specialization (?).

Combining the pieces rewards you a legendary weapon for your current level, and class specialization. It will have four feat runes, and the stats will be of legendary quality, and include 2 epic stats (giving it a power ranking similar to common gear 5 levels above.)

This reward system was introduced in May 2018, and replaced the previous rewards system (cards?).